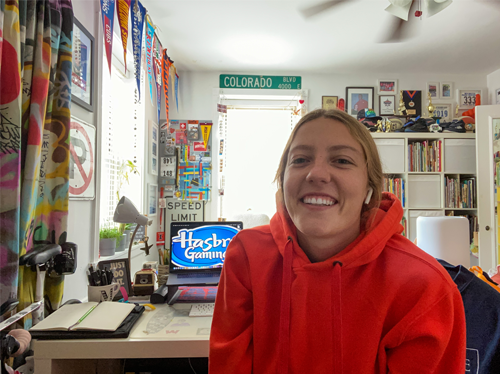 Getting to be a Kid Again!

When I got the call from Hasbro that they were accepting my offer as a summer intern, I was elated! I had decided to apply to Hasbro for the pure fact that their toys and games shaped me into the person I am today. So, to say I was excited was an understatement....

When I got the call from Hasbro that they were accepting my offer as a summer intern, I was elated! I had decided to apply to Hasbro for the pure fact that their toys and games shaped me into the person I am today. So, to say I was excited was an understatement.

Later that month after the call, COVID-19 was spreading. My friends who also earned summer internships were receiving word that their opportunities were cancelled. However, Hasbro reached out to me and explained that their internships/co-ops were going to be 100% online. Even though it would have been great to spend the summer in Rhode Island, it felt good knowing I was still going to have this amazing experience.

My first week at Hasbro was exciting! My team welcomed me with virtual open arms and showed me the ropes. I was invited to lots of meetings to get used to the lingo, see what current games they were working on, and to introduce myself to more people outside my team. There are lots of fun games I get to play with my co-workers over video chat. Meetings don’t feel like meetings when we are talking about games.

When I learned that the internship was going to be 100% virtual, I was a little disappointed because I had been looking forward to experiencing the working environment of being an in-house sculptor, but I was still super excited. Meeting virtually with the sculpting team was really laid back and even though I didn’t get to be there in person, they made me feel like I was still part of the team. The hardest part about working remotely was not having access to more powerful computers, but that wasn’t usually too much of an issue. I also really missed having people around me while I worked since I’m used to that environment at school, but listening to podcasts helped some.

My first week at Hasbro was super exciting and a little bit stressful since it started the day after my last class of the school year, and I hadn’t slept much because of finals. Everything went really smoothly, and I was impressed with how prepared everyone was to work virtually. I was nervous at first because I still wasn’t very used to doing regular video conferences, but after seeing how friendly and casual everyone on the team was, I felt more at ease.

Not being able to work side by side with my manager or co-workers was a huge unknown for me. Product design is such a collaborative field and I would be learning so many new skills, so I wasn’t sure how it would work over video conference. I was pleasantly surprised! Having one on one meetings with my manager and the option to chat or email others with any questions I have makes my home office feel closer to theirs.

Working at Hasbro has been a blast! Being able to be immersed in a company that values their employees and creates a playful and fun work environment is immeasurable and will make it hard to leave when my internship is over. Being able to design fun games for kids who are learning and developing every day is very fulfilling, and being able to come up with those ideas and gameplay makes me feel like a kid again. I can’t imagine leaving this incredible internship but the connections and memories I make will last a lifetime. Hasbro is the place to be!