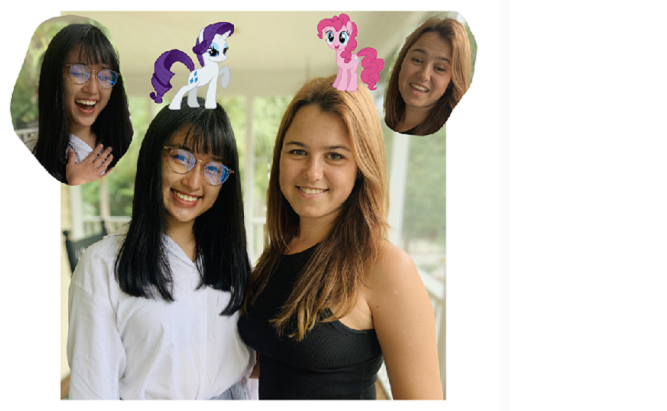 Remote Work is awesome when you live with your coworker!

Hey y’all! I’m Lainey Davidson, and my friend Mild Niamkongkit and I have been Digital Sculpting.......

Hey y’all! I’m Lainey Davidson, and my friend Mild Niamkongkit and I have been Digital Sculpting Interns for the Burbank office this summer!

Our story starts when Hasbro visited our school, Ringling, last October. We were both selected to participate in a workshop to create an articulated toy sculpt based off of a Magic the Gathering character. There was only one problem- we had never played MTG before. Our professor overheard this and would not let us embarrass ourselves to Hasbro by being unfamiliar with their lovely products. A lunch date was set for us to learn.

Mild and I were classmates and acquaintances at the time, but I was excited to get to know her more. She arrived with a large pitcher of Thai Tea, a bright orange, sweet, creamy, highly caffeinated concoction that I fell in love with instantly. We bonded over food, fashion, and a fierce competitive nature. While I ultimately became more obsessed with Magic the Gathering, we both left sharing a more powerful thing: friendship.

Fast forward to COVID19. The world is on fire. Nothing is certain. We just got an announcement that the rest of the semester was to be online, campus was closing. We all had to go home. I was so upset about leaving my friends that I slept on the couch in Mild’s apartment every night so our friend group could stay up late talking. I was going home to South Carolina, and Mild was living with our close friend in Michigan. The only bit of good news we got that week was the date of our Hasbro interview, and Mild’s and mine were back to back!

We hyped each other up. She went first and ended the interview by talking about the amazing artist that was coming up. I opened by lamenting that the person they just interviewed was too good, and a hard act to follow.

Somehow, the ruse worked! We texted each other screenshots of our offers pretty much simultaneously and started to Facetime. We were both beyond excited, but the news was more bittersweet to Mild. An internship in LA, even a remote one, made it really hard to go back to Thailand. There’s the complications with immigration in the time of COVID, and the issue of being on an opposite time zone for remote work. I offered my house, and it was set. We found the silver lining to all this craziness in the world, and it was hanging out near the beach together as we sculpted through the summer.

The internship was a dream come true. I’ve been obsessed with Hasbro properties since I was a little girl and getting my first Disney Princess assignment was exhilarating. I couldn’t believe I got to contribute to the canon of Princess-dom! It was intimidating because I knew it had to be just right to honor the brand and source material.

I was also nervous to be in such a professional setting with these incredible artists as managers. I wanted to impress them and be respectful- but from our first meeting I realized we were going to be friends as well. They were incredibly friendly and nice, but also goofy and willing to mess around and nerd out with us! Our weekly meetings became a time I looked forward to immensely. It was so great to talk about sculpting techniques or what my manager's pet giant tortoise had accidentally eaten that week. One of the biggest downfalls of working remotely was not to be able to go out to lunch and really get to know them more.

This summer was a big learning process for all of us, but Hasbro really did do a wonderful job of transitioning from in person to a remote workplace. I think a big part of it is the lovely personalities that pop out just as brightly in the Teams meetings, as well as great management and organization that made it a really smooth transition. At the end of my internship, we discussed what work the best and what could be improved on. I felt like my opinion and experience was really valued, and some of my and other intern suggestions are actively being implemented. Hasbro showed me what being on a team- in a true sense of the word- was like. And I was so lucky to have one of my teammates working right alongside me!

Ringling College of Art and Design